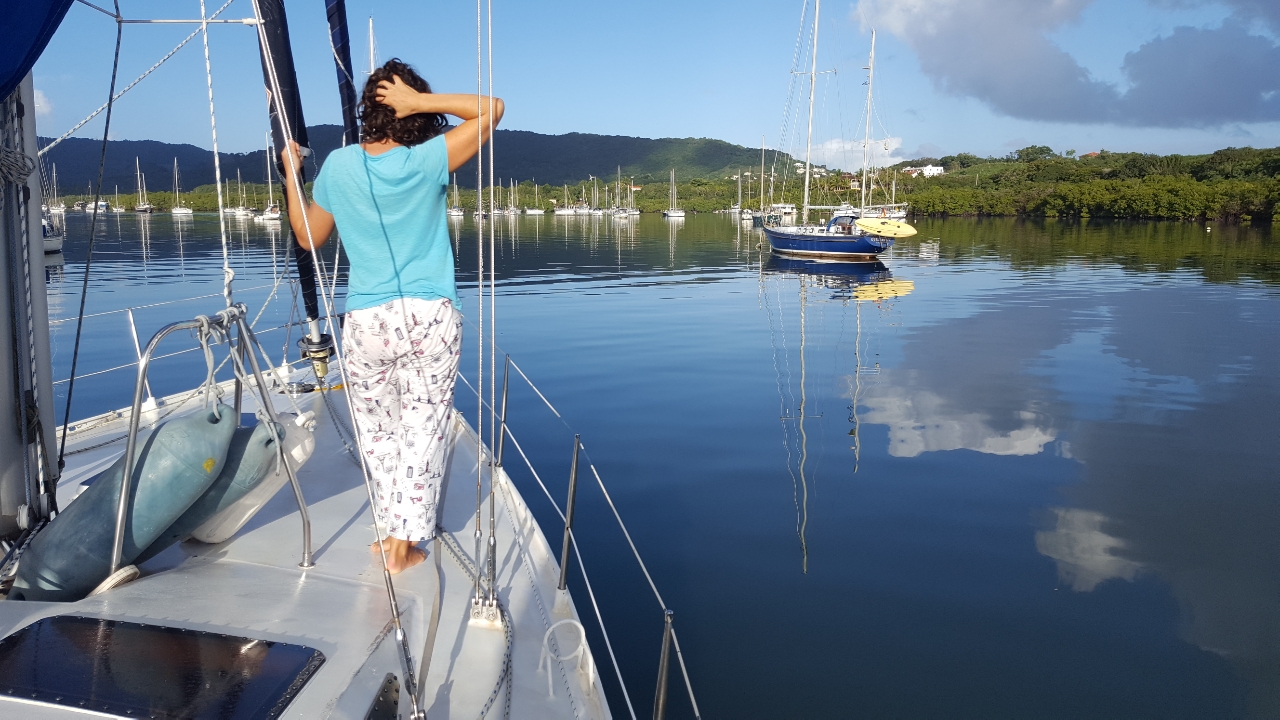 Imagine a body of water surrounded by mangrove and gentle hills. Imagine Thirty-ish boats, most of them on a mooring, some of them on anchor. 90% uninhabited at the time. Imagine incredibly calm dark nights, and a wind that consistently picks up at 9 :30am, blowing stronger during the day, and pushed by series of gusts. An average of 15 to 20 short episodes of rain in the day. Small fishing boats coming back safely in the morning. This is Luperon, Dominican Republic.  To go to shore, we have two options : the dinghy dock at the marina, where there is one beautiful open restaurant, and free hot showers (yes, I said hot ! My first hot showers in two months !!!). Apart from that, one gravelled road going up the hill, with a few houses… The restaurant also hosts yoga in the morning 3 times a week. So nice to stretch a little after bending over so much on the boat… Second option : dinghy a little further to the bright yellow town docks. Tie it up, walk 10 minutes to a busy street that is the heart of Luperon. You will be greeted by dozens of « hola »’s and welcoming smiles, as well as motorcycles zooming by.

We took 48 hours to arrive to Luperon, from Puerto Rico. The passage was rougher on the first day. 3ish meter (9 to 10 feet) swell from the side, quite a bit of wind. But our spirits were high. 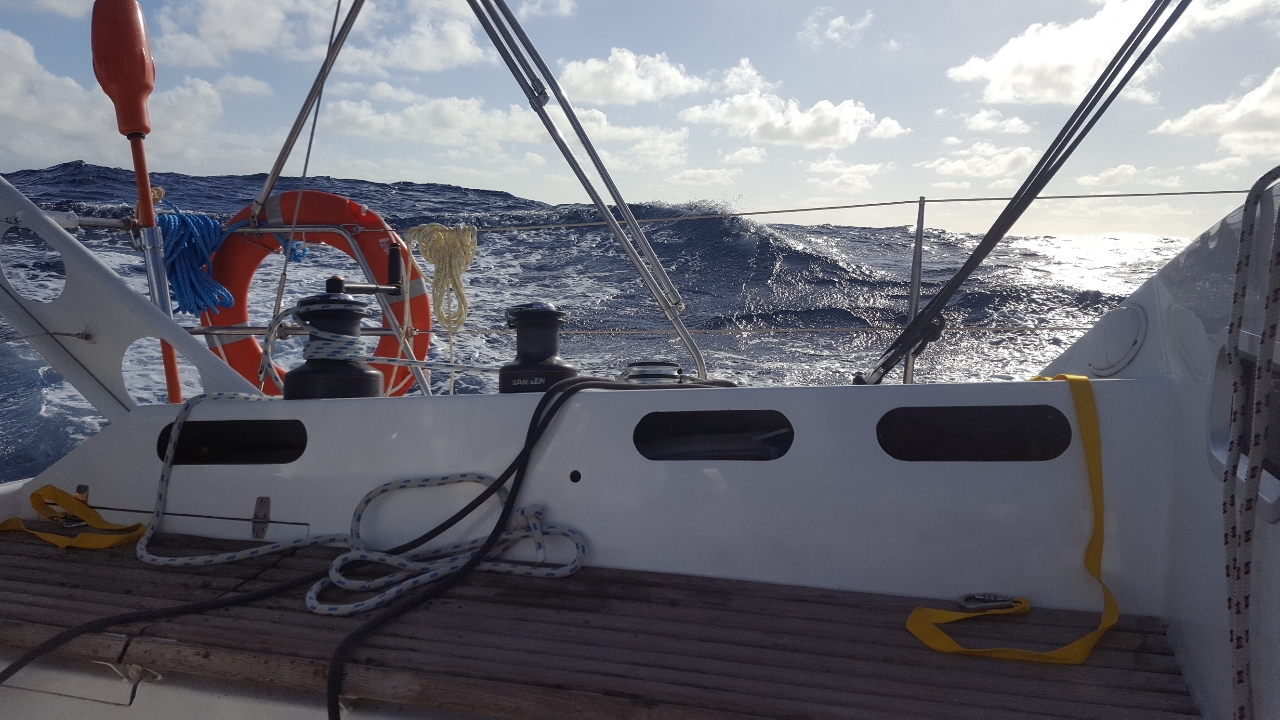 The night was nice, rhythmed by our three-hour shifts. We couldn’t see much at all : clouds and no moon… We welcomed a much calmer second day.

The proximity of the Dominican Republic coast allowed us to give phone calls, which was a treat. We took turns taking naps and being in the cockpit. 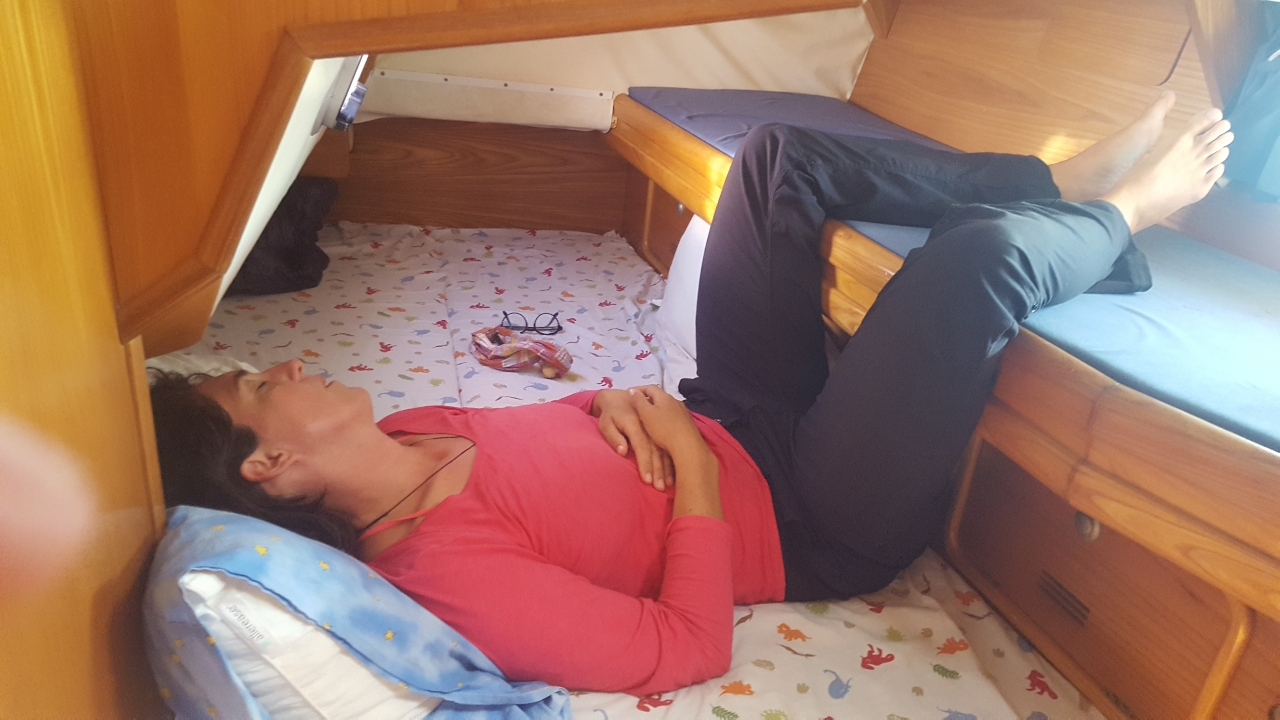 Dolphins came and play with our bow.

But in the afternoon, we stalled in the middle of nowhere, with more than 1km of water under us. We just got caught in a fishing buoy. The main sail was up and pulling. The fishing buoy was fighting the other way. With the addition of the swell, Ubi’s stern was angerly banging up and down. One solution : dive under and cut the ropes… Yuk. We decided my Dad would go, I would deal with the boat. No life vest possible, as he wouldn’t be able to go under the boat.  We knew that as soon as he would cut the rope, Ubi would sail away pretty fast. We secured him with a rope around his chest. I was ready to deal with the steering, trying to turn the boat 180 deg as soon as possible to let down the mainsail. We could not have the safety of the engine on, as the fishing buoy was tangled to the rudder and maybe the propeller… As I said, yuk. And that is a big YUK. I also got the lifebuoy and extra line ready to through at him if needed. One more step to get ready before diving in : the dinghy was secured, hanging from the davits. We needed to have access to the stern, so needed to bring it down and put it elsewhere. So we did… waves were violent and the dinghy got under the boat and almost flipped over. But we got it and tied it up on the side of Ubi. Hewfff. So there it went. My dad grabbed on to the ladder and slowly went in. Waves were knocking him down and his snorkel was not of any use. But he held on tight to the ladder and methodically found the time in this crazy pattern to go under the boat and free the rudder. We were both afraid the boat would slam on his head, but he managed to get through it without damage. As soon as the rope was cut, Ubi moved forward. Papa grabbed the ladder. I turned the steering wheel to get into the wind, so the sail wouldn’t be pushed anymore. I was only able to have a wind from the side. Good enough. I blocked the steering wheel, freed the halyard, and ran on deck to the bottom of the mast to pull on that stupid mainsail to bring it down. Surprisingly, it worked.  We were safe, nothing got broken! Now that Ubi was not going anywhere, (except drifting), my Dad went back in the water to get all the pieces that were still stuck, but the stress was way down, which was nice ! We then re-secured the dinghy on the davits, turned the motor on, got the sails out again, and sailed off. We still had a whole night in front of us. 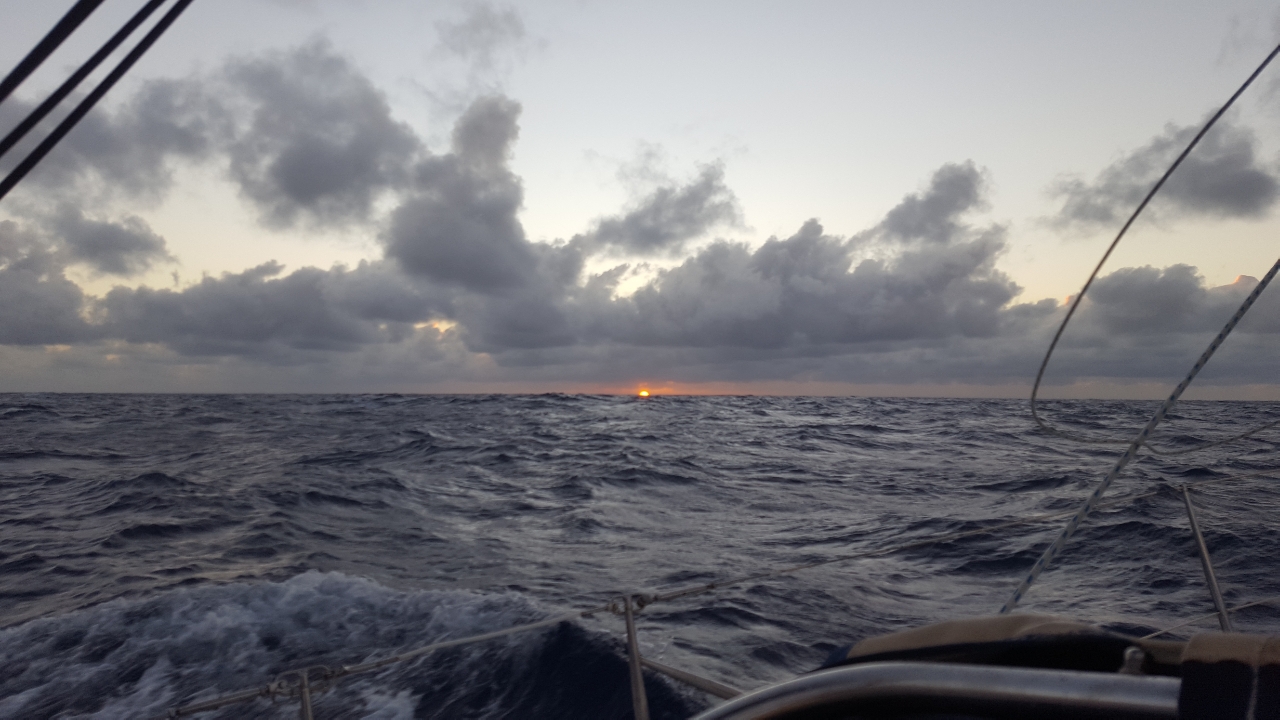 A night still with no moon, with a little thought that maybe, there would be an other fishing buoy… That night was incredibly calm. No wind, no waves. We motored, nice comforting sound in this big ocean. Again, our shifts gave the rhythm. It was peaceful. We arrived calm and safe, early morning in Luperon. 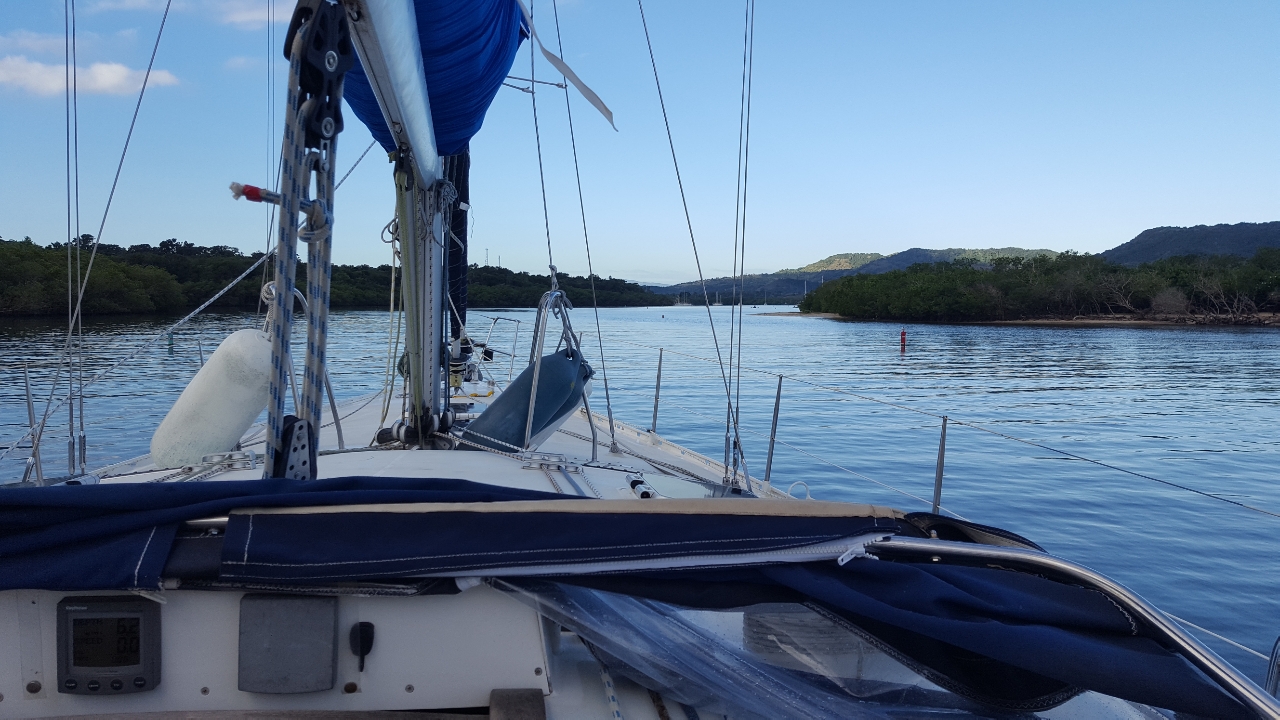