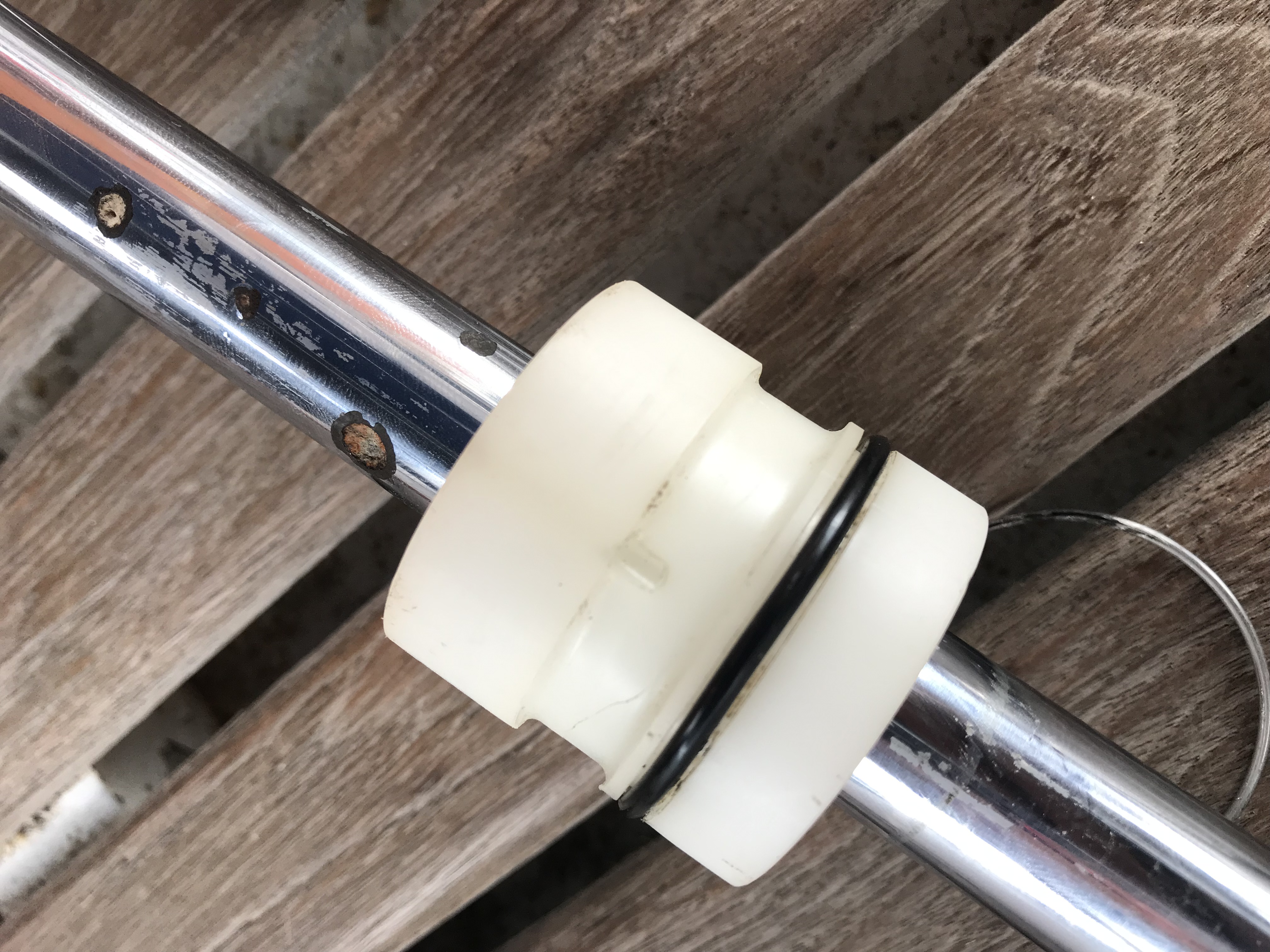 S/V Ubi, as you might know, is a dériveur. It means that the rudder can be lifted in a way to reduce drag when a full keel is not needed for sailing upwind. It is also a great advantage over “regular” sailboats in order to enter shallow areas or anchor very close to the beach, since the keel is not in the way.

On Ubi, like most of the Ovnis till recently, the rudder is also retractable. Actually its lower part can be folded backwards in order to reduce the draft: with the rudder in its up position, the lowest point of the hull is the belly of the boat, and not the rudder or the keel. This feature gives the option to beach Ubi, i.e. we can have it floating on a shallow bottom and wait for the tide to gently lower until the boat lays on its belly on the sand. The belly being flat, it is a stable position and you can leave it as such and float again when the tide comes back in. Although it is technically possible, we have not dared to perform this maneuver. First because we didn’t have to and secondly because we are concerned about the bottom paint and the adverse effect the sand could have on it. Also, we have multiple systems on Ubi that require sea water -water maker, toilets, sink for dish washing, engine, cooling the fridge- and these systems would need to be disabled while we are in low tide.

Nevertheless the topic of this post is not beaching -and be sure we’ll talk about it if ever we do… but don’t hold your breath over it- but it is rather about the trouble we had with our rudder and its retractability. You see the theory of a swing rudder is nice for the above mentioned benefits but the practice is more tricky, as it is often the case. The rudder comprises two parts: the upper part is attached to the rudder post and turns when one turns the wheel; and the lower part is attached to the upper part by a large hinge, around which it can swing backwards when in folded or up position. The movement of the lower part is controlled by a hydraulic piston. We have a control box in the cockpit to raise or lower the (lower part of the) rudder. And the mother of all issues in this design is that the piston lives 24/7 under water and no human-made object seems to resist very well under water, especially in warm sea water.

Back in January-March 2018, we noticed the rod of the piston had some points of galvanic corrosion when we sailed Ubi from Martinique to Florida. So we knew that we had to change it. And we used the opportunity that Ubi was out of the water in Portland Oregon to install new through-hulls. We hauled the boat out at Schooner Creek and they did a few other maintenances and projects while they were at it. One of them was to remove the piston of the rudder and manufacture a new one. Schooner Creek hired out a metal lather for that specialized job. They provided a new rod a week later and told us it would last ten years. Schooner Creek is well known in the area and they have a very solid reputation. We splashed Ubi back in May and left for our adventures in the end of June.

We didn’t pay much attention to the piston of the rudder since it was brand new but we nonetheless made sure to raise the rudder as often as possible to protect the rod -as it is minimally exposed to salt water when the rudder is retracted. It is only in Tahiti when we started to have issues lifting the rudder that we took a good look at it. The hydraulic fluid was leaking around the rod when the pressure was applied and therefore the piston couldn’t operate as designed and the rudder was stuck down. We managed to raise it by a combination of hydraulic pressure and manual help from within the water: someone had to manually help the rudder upward.

We contacted Alubat in France, the boat manufacturer, and we started to talk around about that issue. It was good to be in French Polynesia for this issue since in our anchorage alone there were a few Ovnis, including the same model as ours. An internet search lead to a post from an Ovni in Panama that replaced the piston of the rudder after grounding the boat. As luck would have it, the actual boat was moored near us. And our kids played with the kids of that boat -they moved to a catamaran and are in the process of selling the Ovni. They offered for us to look at their spare piston -restored in Panama. But another Ovni owner told us that it didn’t seem in very good shape, so we ended up giving it back. And we decided to let the rudder down while we had a dear friend visiting. We would deal with it later.

When we returned to Tahiti, our friend had left and we managed to put the kids to school for a whole month in a school right in front of where we anchored. We had a full month to work on boat projects. So we spent a few good hours to remove the piston from within the water. Then we brought the piston in Papeete to the local experts, at Soflex. They kept the piston and we moved on to finding other parts in town. They called us back to their shop the next day. They wanted to discuss the next steps. When I came there, they told me that the rod was stuck so tightly in the piston, they had to extract it… with a truck. The rod was badly corroded and the piston outer tube was slightly bent. They could change the fittings and O-ring to repair the leak but we needed first to have a new rod made. They sent me to a machine shop nearby where they were willing to turn a new rod but diagnosed that the outer tube was cracked and therefore the piston might not work for long, even with a new rod. And they said they didn’t have the right tube diameter to make a new tube. They speculated that the crack in the tube happened when the truck forcefully extracted the rod. I went back to the hydraulic shop to relay the theory of the machine shop guys and also to complain that I had paid for their breaking of our piston. We had a long but productive chat but the summary was the following: they gave me the money back, they didn’t see any crack; they’ve done nothing wrong and the machine shop guys are overcharging crooks. They also suggested that we try to see another machine shop and see what they can do as far as repair of the piston. One thing that was clear is that the piston was slightly bent out of shape in its top part. It is unclear how it happened but we now suspect it happened in Portland; and the deformed circle made it very hard to remove the rod and its perfectly round internal parts.

In the meantime, we sent a note to Schooner Creek back in Portland with picture of the extracted rod to show the corrosion level. One picture also showed the rod attracting a magnet: this demonstrated that the rod was actually regular steel rather than stainless steel. This explained the bad overall state to the rod after a bit more than 1 year. The manufacturer intentionally or not cut corner and manufactured a substandard replacement piece. And it could never have withstood ten years of service.

We weren’t sure on how Schooner Creek would react to our predicament: it was a year ago and we were too far to storm in their office or any such dramatic actions. And we saw from experience that some boatyards in the Caribbean would provide very questionable parts and services, at a high charge, for boats that they knew would sail on and would be far away when the repairs or parts wouldn’t hold. Caraibe Marine in Le Marin, Martinique, is a prime example of high level fraudulent activities, but that would be for another post. So you can imagine our happy surprise when we heard that Schooner Creek would send us a check for about the price of a new piston from France. Of course, it doesn’t compensate for the time and costs to replace the piston and all the complications that make a big part of this story but it is still way more than what unscrupulous marine services like Caraibe Marine would do. So kudos to Schooner Creek !! It is even more impressive when we learnt that their contractor was not standing by his work of the rod and therefore would not refund Schooner Creek. I would encourage Schooner Creek to publicly name that contractor and to be sure to never hire him back until he puts more warranty -and quality control- behind his work.

We ordered a new piston as soon as possible from the French company Hydroem, which built the original part. We sent the order before sorting things out with Schooner Creek as the shipping is either long and/or expensive from France to French Polynesia. We lucked out as the piston should be delivered in Paris in time at Nathalie’s parents’ place so they can pack the piston in their luggage for their soon coming visit.

We still need to figure out what we’ll do with the old piston. An idea is to follow up with another machine shop in town to rectify the tube and make a new rod, in stainless steel. But it is unclear at this point how much time and money we want to invest to get what would ultimately be a spare part… and one that we would likely not use within 10 years if all goes well.

What lessons can be learnt here?

10/29 Update: We have installed the new rudder piston and all is working great again. Here is a video of the underwater installation.